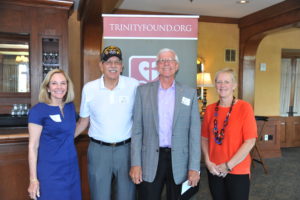 Vet to Vet Tennessee’s (VTVT) initiative is designed to prevent the most preventable cause of death: suicide. VTVT has fostered suicide prevention for the past four years and has one QPR Suicide Prevention Gatekeeper certified instructor who has trained over 400 first responders, faith-based organization members, and veterans in Question, Persuade, Refer (QPR) Suicide prevention. Veterans are the highest risk group of suicide; at least 20 veterans die by their own hand each day.

During a Congressional hearing on September 27, 2017, the Department of Veterans Affairs (VA) Office of Inspector General (VAOIG) stated “The data showed that an average of 20 veterans died by suicide each day, 6 of the 20 were recent utilizers of VHA services—in the year of their deaths or the previous year.” 70% have not used VA services. VAOIG Daigh concluded “Strategies that envision extending VHA’s efforts to prevent suicide to those veterans who do not receive care through VHA.”,

Our mission has always been to extend our efforts to those veterans who do not receive care through the VA. Even though the program has earned an A+ rating, we have only reached 400 individuals. Therefore, our strategy is to increase the number of certified QPR Gatekeeper instructors.

Under this proposal, the VTVT Treasurer will receive his QPR Master Trainer certification who will then train 10 QPR Suicide Prevention Gatekeepers. The vision is to train over 2,000 in three years. The program is free to the public.