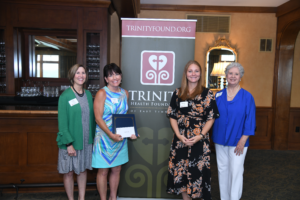 The recent Tennessee State Health Plan reports Tennessee obesity rates to exceed the national average and among the highest in the nation. Obesity is a major health threat in East Tennessee and significantly contributes to additional problems including diabetes, cardiovascular disease, stroke, and more. However, research shows that keeping active can help people stay at a healthy weight or even lose weight. And, additional research reveals evidence of positive correlations between park access, park use, and increased physical activity levels.

“Access to safe parks, greenways, and sidewalks,” is a health priority identified by the 2015 Together Healthy Knox initiative. To that end, Legacy Parks Foundation plans to build Sharp’s Ridge Playspace in north Knoxville for an underserved population presenting inactivity and obesity rates higher than the community average. Similar to the successful Baker Creek Play Forest, the Playspace will offer access to fun and challenging amenities to increase physical activity for citizens of the neighborhood and the entire community. The Playspace, located in the woods near Christenberry Heights housing development, will introduce a new audience to nature while encouraging physical activity to develop healthy habits.

Collaborating with the Knox County Health Department, Great Schools Partnership, City of Knoxville Parks, and other outdoor activity organizations, Legacy Parks will demonstrate the proven correlation between accessible recreation amenities and improved health by increased activity levels. The Playspace will be built on Legacy Parks land, and once completed, will be conveyed to the City of Knoxville Parks Department for continued management and maintenance.