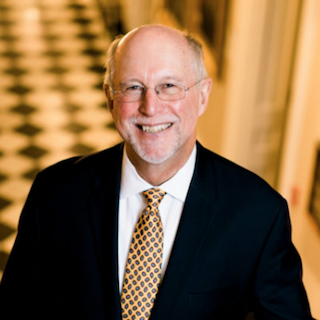 Laurens Tullock served as the President of Cornerstone Foundation of Knoxville, philanthropy that focused on helping Knoxville reach its full potential. With a background of two law degrees, and leadership results as an Air Force officer, a white-collar fraud prosecutor with the Justice Department, and a City official, he focused on his passion for Knoxville and Tennessee in 1997 to start Cornerstone for the private sector funder and was President for the entire 20-year history. Laurens was recognized as a change agent in Tennessee through selection for the inaugural class of Leadership Tennessee in 2013. He is also a multi-term board member of Leadership Knoxville, the opening speaker for each Introduction Knoxville class, the annual graduation speaker for Leadership Knoxville, and a founder of the Knoxville Fellows. He is the past Chair of the Board of Project GRAD USA, a national education reform effort, and was the original champion of Project GRAD Knoxville, a public-private partnership that has dramatically improved inner-city graduation rates. He was the original organizer of the Great Schools Partnership in Knox County and was an organizing partner of the Tennessee State Collaborative on Reforming Education. Both organizations are collective impact initiatives that have been catalysts for Tennessee becoming the fastest improving state in the nation on education outcomes, and Knox County becoming the only large school system ever named an Exemplary System in Tennessee. He was an early champion of downtown Knoxville revitalization, and over the years led numerous City of Knoxville, private sector, and philanthropic efforts to help bring that revitalization to a tipping point. Over those years that vitality was returning to downtown, he was the City point person on the development of Volunteer Landing, and later the real estate developer on behalf of Cornerstone Foundation of 4 Market Square – housing Cafe 4, Square Room, and the Knoxville Fellows. It has been and continues to be Laurens’ life’s work to see Knoxville reach its full potential and inspire others to do the same.